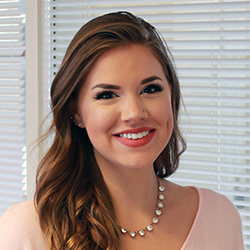 Mack is a fourth year doctoral candidate in the Social Psychology program at Syracuse. Their research interests broadly include intergroup relations, stereotyping, and prejudice. They are particularly drawn to under-studied topics and populations, such as class prejudice and prejudice toward sexual and gender minorities (e.g., bisexual, pansexual identities and non-binary, agender identities). Their work on class prejudice involves identifying factors that influence evaluations of targets based on their class status, such as perceptions of work ethic and situational or dispositional attributions. In future work, they hope to examine intragroup prejudice and strategies for fostering solidarity within marginalized communities.

In research, we manipulated whether sexual orientation groups were referred to using common identity labels (e.g., “gay”) or definitions (descriptions of their patterns of attraction). Heterosexual participants responded more favorably to gay and lesbian people when they were referred to as “gay” or “lesbian” (label condition) as opposed to being described in terms of their “attraction to the same gender” (definition condition). A combined sample of sexual minority participants did not show the same pattern, but did express relatively unfavorable evaluations of pansexual people referred to as “pansexual.” (We suspect that these results may have to do with self-presentational concerns and/or familiarity with the terms.)

In work stemming from the same data set previously described, we explored the content of stereotypes through feeling thermometer and identity stability evaluations for five sexual orientation target groups (heterosexual, gay/lesbian, bisexual, pansexual, and asexual). Gender norm violators are typically perceived negatively, and sexuality is an important site for gender norm enforcement. Bisexual, pansexual, and gay men may be perceived as violating masculine gender norms by virtue of their sexual orientation. Our results suggested that the intersection of gender identity and sexual orientation produce unique stereotypic assumptions for bisexual and pansexual targets. Perceptions of sexual orientation stability are salient when evaluating bisexual targets and, theoretically, would also be relevant when evaluating pansexual targets. We tested how heterosexual and sexual minority samples would evaluate the stability of bisexual and pansexual targets. While both samples demonstrated in-group bias, participants rated bisexuality as more stable than pansexuality, but less stable than G/L identities.

This research aims to broaden current understandings of factors that influence class prejudice. In our first study, we applied a frequently used paradigm in intergroup relations research (a simulated hiring scenario) to the area of class attitudes. Contradicting prior research, we found that participants had significantly more positive attitudes toward a low-socioeconomic status (SES) candidate than a high-SES candidate. Study two examined how salient indicators of work ethic may play a pivotal role in a hiring context. The third study manipulated both SES and perceptions of work ethic to investigate the role that endorsement of the Protestant work ethic (PWE) plays in shaping class attitudes. A fourth study investigated how evaluations of a candidate may differ when no information on work ethic is provided. Overall, this research suggests that perceptions of work ethic and class status may operate together in determining attitudes. Specifically, when low-SES targets are evaluated as high in work ethic, this may trigger a specific sub-type of the “hard-working poor” that overrides negative stereotypes of low-SES targets as lazy or less competent.

This research investigates the relationship between class attitudes, and attributions theory. Attributions for class status (situational versus dispositional) are a key factor in predicting subsequent evaluations (Bullock, 1995; Bullock, 1999; Kraus et al., 2012; Kraus, Piff, & Keltner, 2009; Weiner, Perry, & Magnusson, 1988). We manipulate attributions for current socioeconomic status (lazy or hardworking versus lucky or unlucky) and measure subsequent evaluations of class attitudes, including worth ethic traits, class-relevant traits, and warmth and competence traits (studies one and two; Cuddy, Fiske, & Glick, 2008). In future studies, we hope to build upon our previous work by introducing outcome measures aimed at capturing behavioral intentions related to class attitudes (e.g., intent to financially donate or volunteer time toward a non-profit organization related to preventing and ending homelessness).