This page presents brief examples of interesting results from some of our recent and ongoing research projects. 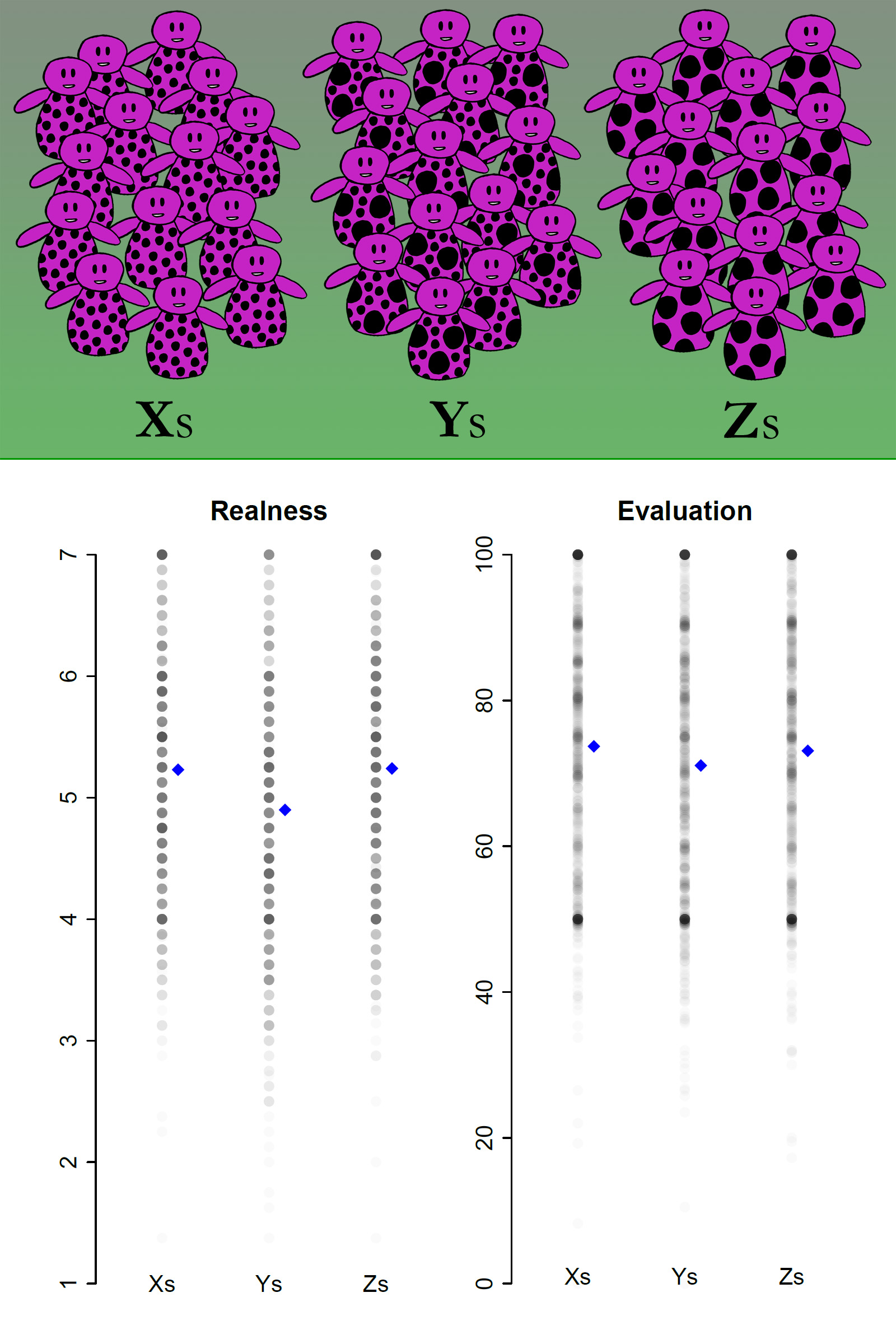 Across five studies involving groups of creatures in a hypothetical society, participants spontaneously imagined the “intermediate” group (pictured as “Ys”) as being less of a “real” group and less positively evaluated. (In the graphs, darker shading conveys more overlapping observations, the total sample size for each rating is 848, means are represented with blue diamonds, and the confidence intervals are too narrow to be visible.) 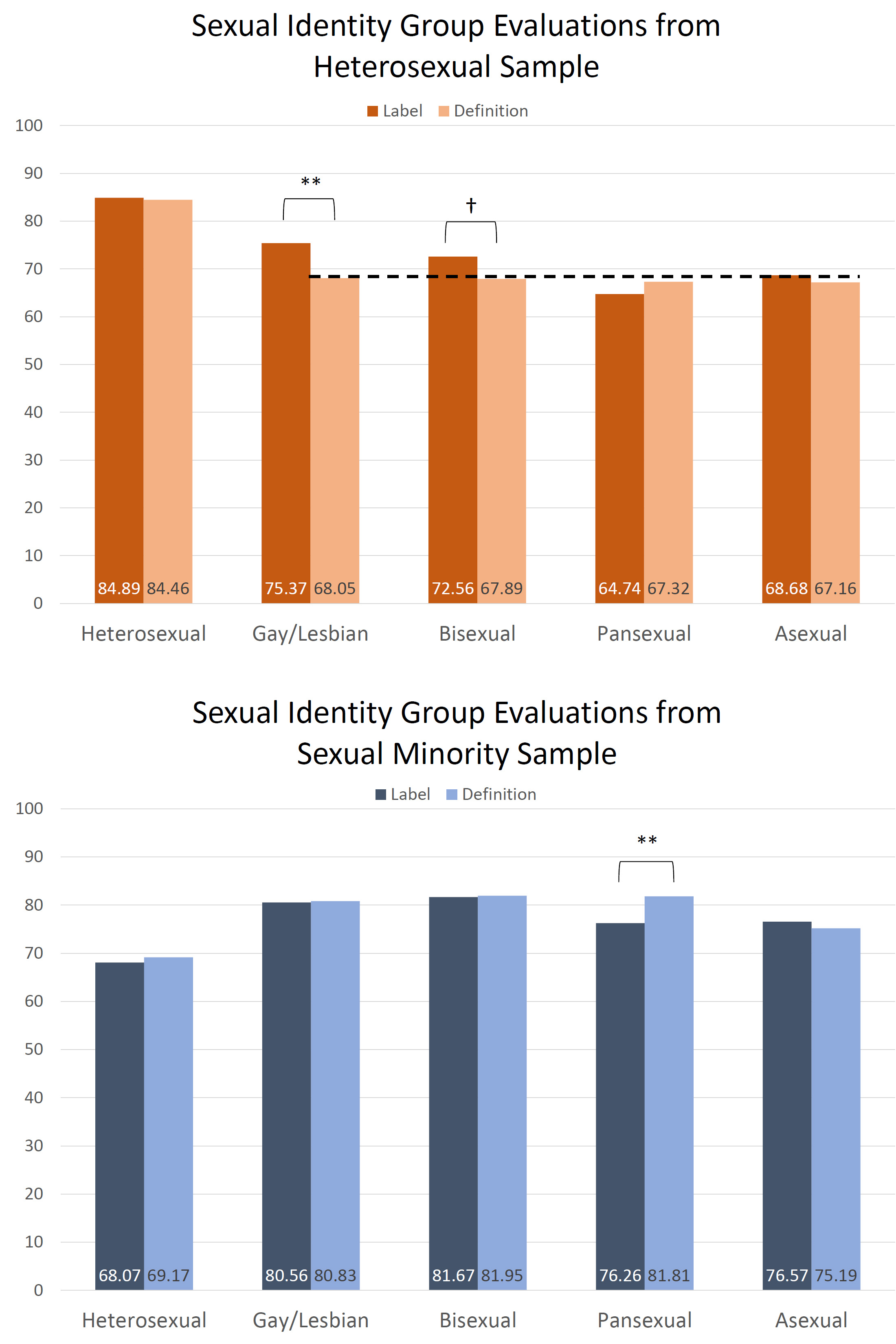 In research led by Mackenzie Ess, we manipulated whether sexual orientation groups were referred to using common identity labels (e.g., “gay”) or definitions (descriptions of their patterns of attraction). Heterosexual participants responded more favorably to gay and lesbian people when they were referred to as “gay” or “lesbian” (label condition) as opposed to being described in terms of their “attraction to the same gender” (definition condition). A combined sample of sexual minority participants did not show the same pattern, but did express relatively unfavorable evaluations of pansexual people referred to as “pansexual.” (We suspect that these results may have to do with self-presentational concerns and/or familiarity with the terms.) 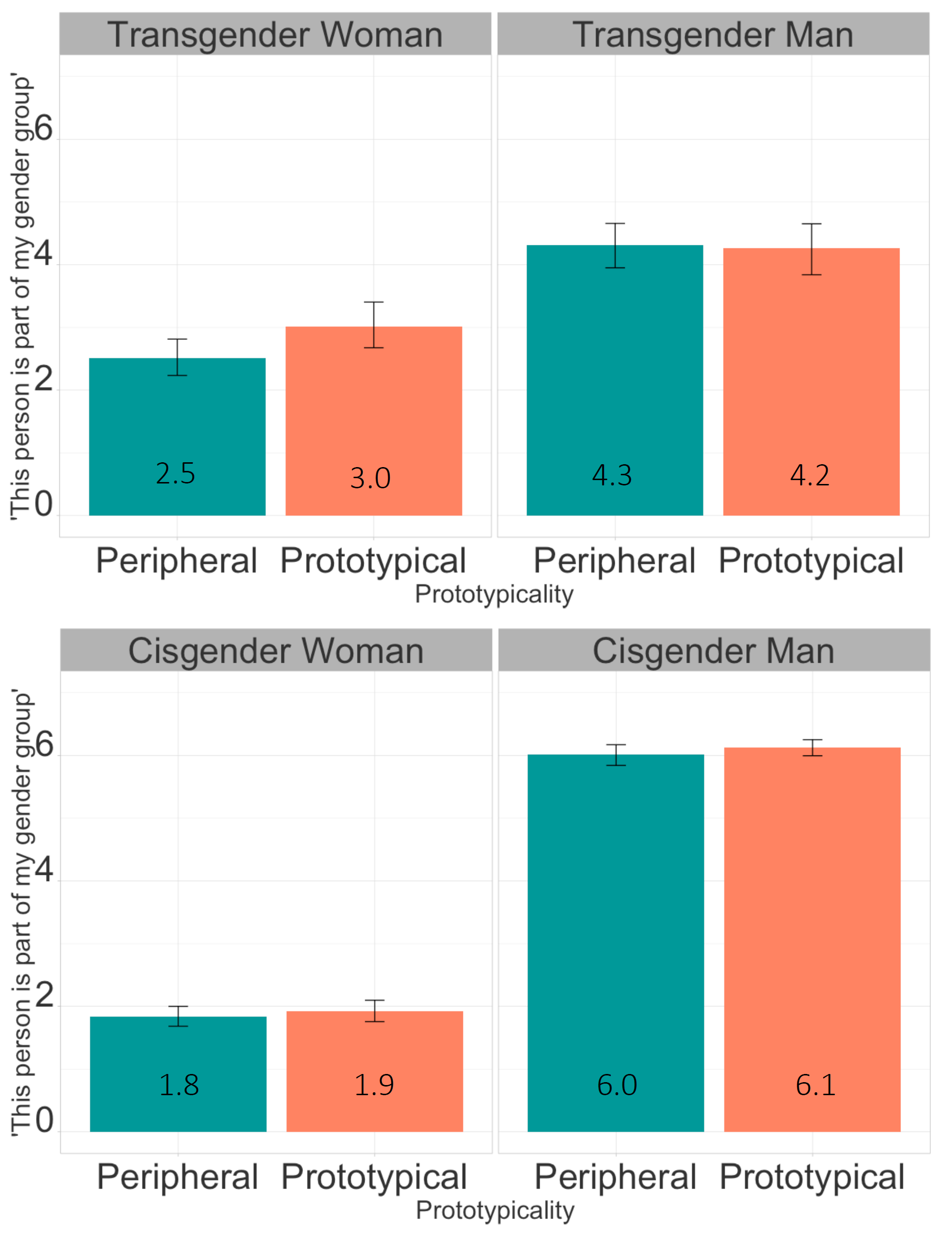 In research led by Alexandria Jaurique, we manipulated whether heterosexual cisgender men were told they had performed in a manner similar to other men (prototypical of their gender ingroup) or similar to women (peripheral) on an unrelated task before they reported whether people depicted in several Facebook profiles were members of their gender group. On average, participants described cisgender men as “men” to a greater extent than transgender men, and cisgender women as “women” to a greater extent than transgender women. Additionally, though, feeling peripheral caused men to reduce the extent to which they described transgender women as “part of my gender group,” raising the possibility of tension between controlling the boundaries of the group and misgendering trans women.

Investigating Class Attitudes: Derogation of the Lazy Rich and Praise for the Hardworking Poor 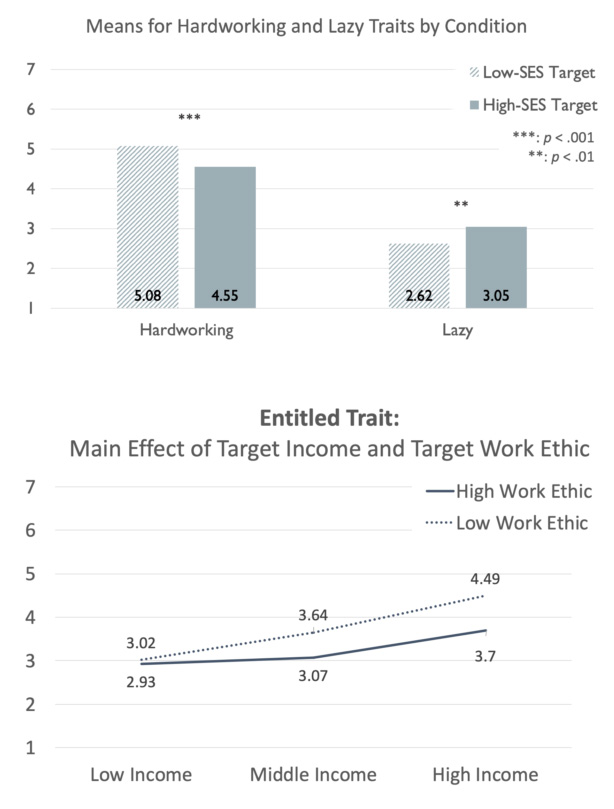 This research, led by Mackenzie Ess, aims to broaden current understandings of factors that influence class prejudice.  In an initial study, and contradicting prior research, we found that participants had significantly more positive attitudes toward a low-socioeconomic status (SES) candidate than a high-SES candidate.

We later manipulated SES and perceptions of work ethic to investigate the role that endorsement of the Protestant work ethic (PWE) plays in shaping class attitudes. Overall, this research suggests that perceptions of work ethic and class status may operate together in determining attitudes. Specifically, when low-SES targets are evaluated as high in work ethic, this may trigger a specific sub-type of the “hard-working poor” that overrides negative stereotypes of low-SES targets as lazy or less competent.

In research led by Mackenzie Ess, we investigate ways in which class attitudes may be influenced by attributions people make about a target’s socioeconomic status (SES) group. In a current study, participants read a short vignette about a low-SES target who is either lazy (a dispositional attribution for SES) or unlucky (a situational attribution for SES). We are interested in how people may evaluate low-SES targets differently depending on this attribution. Specifically, we are predicting that participants will evaluate unlucky (versus lazy) targets more positively with respect to trait evaluations and that this will also be reflected in their endorsement of classist stereotypes.